15% Off Tickets at Second City

Have a laugh with Member Perks at Second City! When it comes to comedy, no one can dispute that Second City is one of the most influential theatres in the world. With locations in Chicago, Toronto, and Hollywood, some of comedy’s biggest stars got their start at The Second City.

Take advantage of a 15% discount on tickets for all Second City for performances, excluding Saturday evening shows. Redeem this incredible deal online with code ‘bike’. 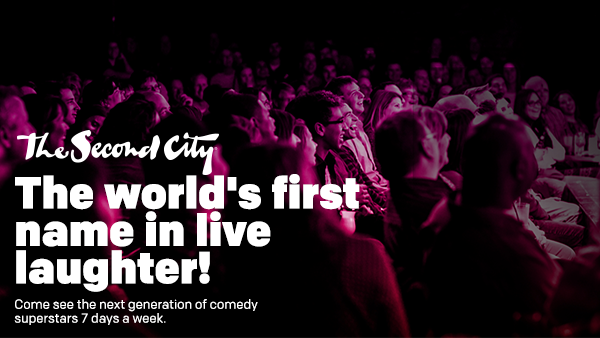 If I Could #Throw Back Time – All NEW Show!

Come bask in the neon glow of nostalgia in The Second City’s brand new revue! If I Could #Throwback Time sends audiences through a virtual time machine, mining comedy gold from ancient treasures like old school video games! Power Rangers! And Canada’s long, complicated history of sweeping social injustices! Set to a soundtrack that’s sure to bring back some of your worst memories, The Second City’s latest takedown of life as we know it–and remember it–is full of lust, laughter, psychos, and “Sandstorm.” Take refuge from climate change inside our theatre, where time is a theoretical construct and improv is an actual superpower.

The Second City Totally Likes You

Human civilization dates back to 10,000 BC, and yet we still can’t seem to figure out love. The Second City aims Cupid’s bow at dating, sex, meet-cutes, and meet-uglies in this hormone-and-hilarity charged show that marries classic archive material with brand-new swipes at relationships.

The Second City is taking family entertainment to mind-blowing new heights! Bring the whole gang to watch two teams of totally top-notch improv maniacs face off in a comedy showdown of totally bonkers proportions! Fueled by your weirdly wonderful suggestions and totally amazing audience volunteers, our teams will do whatever it takes to earn your votes–and your laughs.